Here comes the second batch of the recently started ‘country fun facts’ series. How much do you think you know about the Czech Republic or Romania? Have you really heard it all about Spain and Poland? Even if you have, you might not be that familiar with the somewhat less discovered Lithuania… (truth be told, I wasn’t). Keep reading if you wanna excel at a possible second edition of the pub quiz! 😉

Radka from the beer nation of Jedi followers, that is the Czech Republic, informs us:

Beer has been brewed in the Czech Republic since AD 993 and the country has the highest beer consumption per capita in the world for the 20th consecutive year. You wonder how much it is per person and year? The peak was 159,1 litres in 2006, nowadays it is around 148,6 litres per head. It is eternal truth that beer is cheaper than water in this beer nation, that is probably why you can find a beer spa and beer cosmetics everywhere. Na zdraví!

In the Czech census of the year 2011 (Štěpán from EUROSTAT could tell you more), a striking revelation was discovered: in the religion section, 15,070 Czech citizens wrote they are Jedi Knights. Another surprising fact is that 4.8 million people (almost half of the population) refused to answer the question about religion (the dark side of the Force, I guess) and nearly 1.1 million people put down Roman Catholic. May the Force be with you, dear friends!

How can you recognize people from the Czech Republic at the very first sight? You do not have to watch very closely, socks in sandals are a national phenomenon (at least people say so). For years they have been judged the lowest of the low in terms of style mistakes, however, socks in sandals have been recently voted the number one summer style as American celebrities wear it also this way…so the motto for this summer is: SOCKS UP! Just to improve our image and as an evidence, we do have nice shoe shops, such as the famous shoe chain Baťa.

Andrea explains that in Spain you may find eco-friendly grape devourers of Japanese descent:

In the small Andalusian town of Coria del Río, many people carry the surname Japón (Japan), as they are descendants of the Japanese samurais and diplomats who visited Spain in the 17th century and chose to stay. Their ambassador, Hasekura Tsunenaga, was known among Spaniards as Felipe Francisco de Fachicura.

Our luck for the year depends on a bunch of grapes: as the clock strikes midnight on December 31st, Spaniards devour grapes. And not a random number of them, but twelve, following the tempo of the bells in Madrid’s Puerta del Sol. Thus, when other Europeans are kissing and wishing each other a happy new year, we are performing the Heimlich manoeuvre on our choking aunts.

A 90-year-old man called Justo Gallego has spent the last 50 years building a cathedral out of recycled construction materials. He is not an architect, and he hasn’t even seen many cathedrals in his life. For some, he is just a madman, another Don Quixote. For others, he’s the living proof that anything is possible. You can visit Don Justo’s cathedral (and maybe lend him a hand) in Mejorada del Campo, near Madrid.

Natalia from Romania takes us to the one and only merry graveyard and presents two prominent Romanian figures:

Death can have a funny side… at least in Săpânța, a small village in the North of Romania, where you can find the Merry Cemetery (RO Cimitirul vesel). Far from the gloomy, cold tombstone, each tomb has a unique carved wooden cross painted in vivid colors (mainly blue) and a small clever and ironic poem about the life and character of the deceased. Here’s an example: Under this heavy cross/Lies my poor mother in-law/Three more days she would have lived/I would lie, and she would read (this cross)./You, who here are passing by/Not to wake her up please try. Hopefully, you will not laugh yourself to death if you ever visit it.

In case you did not know, Romania has the one-leader-version of Mount Rushmore. The Rock sculpture of Decebalus depicts the last king of Dacia, the land which later became known as Romania, who fought against the Romans to keep the independence of his territories. The 40-meter high sculpture is the tallest rock sculpture in Europe.

Since „beloved leaders” is a recurrent topic (ain’t that so?), here’s a fun fact. Nicolae Ceaușescu, the communist president of Romania during the „Golden Age”, „most beloved son of the people”, made official visits to over 100 countries, being the only president on the East side of the Iron Curtain to ride about in the Royal carriage with the Queen herself, waving at crowds, to be invited to the US by three presidents, or to receive the visit of president Charles de Gaulle himself. And this, while also making official friendship visits to North Korea, China, or Libya, and meeting with leaders such as Kim Il-sung, Tito, Fidel Castro, or Mao Zedong.

Živilė from Lithuania depicts the smell of Lithuania and sends us to a most uncommon academic institution:

We all know that a particular smell can bring us to a particular place and time like nothing else. That’s why Lithuania has it’s own perfume. Just release ”The Scent of Lithuania” and you will smell the notes of amber, tree moss, lily of the valley and even tree smoke. Now it is literally possible to take Lithuania with you everywhere you go.

Can you imagine an angel in roller blades? Lithuanian sculptor Vaidas Ramoška can. He has created a bunch of lovely baby-faced angels resting on the ledges of buildings, balconies and benches in the capital of Lithuania. For this purpose the sculpture of an angel was chosen, because angels symbolise kindness, protection, and support. And it actually works miracles: once one small piece of one of the sculptures cleaved and someone put a sticking plaster there in order to heal the angel. It was decided to adopt an angel as a symbol of Vilnius, therefore it was sent to Warsaw, St. Petersburg, Kaliningrad, Stockholm, Tallinn, Dublin, Ljubljana, Riga, Minsk, Milan, Moscow and even Guangzhou. By the way, every child born in Vilnius receives a little angel to protect them.

Have you already decided what you are going to do after the Blue Book traineeship? Not yet? In this case you should consider studying at Eastern European Men School. There they will definitely make a man out of you and teach you the main rules of life. Check it out:

Ania from Poland invites us to sail on… whatever floats and go dwarf-hunting:

If you enjoyed the recent Luxembourgish Duck Race, perhaps you might also be interested in Poland’s Championship of Sailing on Random Stuff which is held every year in Augustów, in north-eastern Poland. The participants of the race have to sail a distance of 400 metres on a ‘vessel’ of their own design and construction. The slogan of the contest is ‘what floats will not drown’. 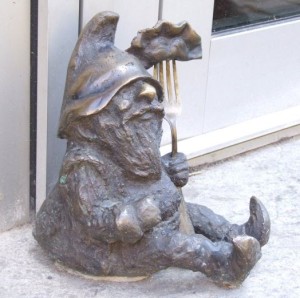 Wrocław, a city in south-western Poland, has become a fairly-tale place in the last decade. Currently there are 239 tiny statues of dwarves scattered throughout the streets, corners, alleys and squares of the city. You will not see them at first sight, as they are very well hidden from the eye of an inattentive passer-by. Every one of them is different and represents a specific trait (among others you will find: Booklover, Couch potato, Drinker and Boozer, Sleepwalker, Dumplinger, Trendy-Boy, Blindie and Deafie, Papa Dwarf and, of course, Dwarfette).

Warsaw’s Palace of Culture and Science, considered as the symbol of Poland’s capital and still the highest building in the country, was in fact a gift from the Soviet people to the Polish nation, designed by a Russian architect and based on the Soviet skyscrapers. 35 million bricks were used to complete it and the job was done in 1955, in as little as 3 years. The building hosts 350 administration employees, among them 25 cats to scare away rodents.

Again, if you want to share some fun facts about your country like your colleagues did, you are more than very welcome to do so! Drop us a line at: luxembourgcommunication2015@gmail.com. And remember, it’s for the readers! 😉