Luxembourgers have one of the world’s lowest fertility rates, but the population of the country is rising, mostly thanks to the immigration. From 1947 to 1997, the population increased from 281,000 to 420,000. Currently the Grand Duchy’s population is estimated to be around 536,000, with approximately 20% of the people (107,000) living in the capital.

In the 1950s and 1960s the largest groups of immigrants came from Italy, but since the 1970s the Portuguese have taken over. At the moment, the foreign nationals in the Grand Duchy mount up to 45.9 % of the total population, with Portuguese on the number on spot with 16.4 % and French on the second place with 7 %. In the capital the number of foreign nationals must be even higher. In addition, 44 % of Luxembourg’s work force is estimated to be made up of cross-border commuters, who of course cannot be seen in the census but add up to the international atmosphere of the city. Luxembourg is truly an international city – just the way we like it! 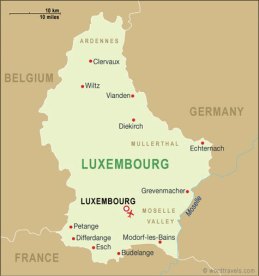 Luxembourg is one of the world’s smallest sovereign states with its 2,586 square kilometres (998 square miles). The longest distances you can find in the country are 82 kilometres (51 miles) from north to south and 57 kilometres (35 miles) from east to west.

Luxembourgers can make anyone jealous with their amazing language skills. Most of them speak, read, and write perfectly in French, German, and Luxembourgish (Lëtzebuergesch). French and German are administrative languages of the country, while Luxembourgish is mostly spoken at home and shops.

Written Luxembourgish is a very young language. No official rules of spelling or grammar existed until 1984, so there can still be some variation and older Luxembourgers can find themselves accused of making spelling and grammatical errors in their native tongue.

Many of you can be a bit confused over the Luxembourgish flag. It is similar to the Dutch flag, except that the blue stripe of the Luxembourg flag is a brighter shade of blue. In addition, there is also the ensign of Luxembourg, which is used for ships and aviation.  The ensign shares the same colours as the flag: ten narrow blue and white stripes, with a red lion over the centre. The same stripy pattern with a lion is used in the coat of arms of the city of Luxembourg.