So, after the stunning Ghent and the too-cute-to-be-real Bruges, we decided to give Antwerp a shot.

What was I expecting? Well, in the Geography book in the sixth grade there was a short article about a major port city, accompanied by a photo of a port. So that. That’s what I was expecting. Didn’t seem much of a reason to google it, ever. How wrong I was.

The first point on our tourist checklist was the cathedral. By how it made me feel, it was nothing short of the one in Seville, Spain, and mind you, we have recently seen some French ones. The lady who was guarding the secrets of this magnificent building asked me where I was from, so that she could give me the guide in my language.

Me: Oh, great, I’m from Slovenia.
The lady: OK, so do you want a French or an English one?

After seeing some Rubens’ paintings (they have them in there), I just sat there, in the main nave, staring at the columns and the ceiling and the altar. And the altar was all blurry because I didn’t have my glasses on at the moment. I like doing that, sitting in cathedrals, and could do it for ages. Thankfully I decided not to do it because, as I later learned, there were people waiting outside and it was windy.

Then we went on to see the Scheldt river, which is probably not very wide but quite wide for Slovenian standards and also wider than Luxembourg. And there’s a fortress next to it. It looked like this: 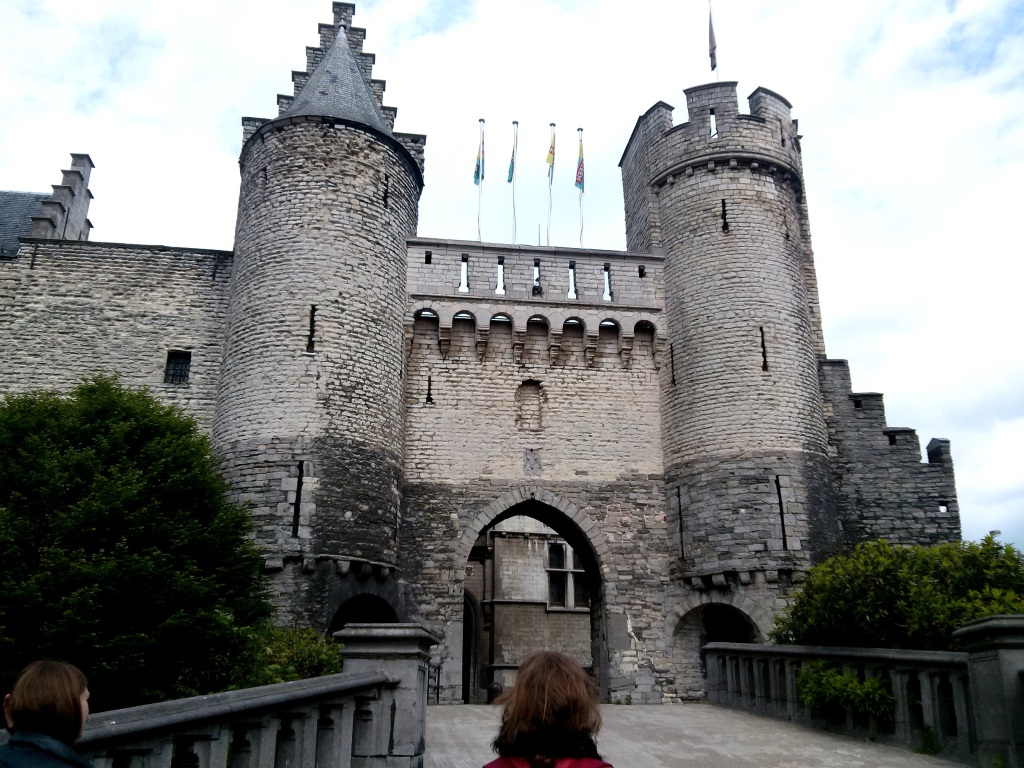 After a couple of hundred metres walking backwards (it was not compulsory), there was this modern red tower with a terrace on top. It offered a spectacular view of the city, like this:

And you reach the top by taking ten escalators in a row, which is fun and a reason in itself to go up there.

After this, the group kind of split and some of us, OK, two of us, dropped by a lively looking place because it looked like they might have had sandwiches there. Oh my, my. It was a Food Truck Festival. The sheer creativity of the food truckers (?) made this place worth a visit, from the visual presentations of the trucks – Mexico, the Wild West, the 50s – to their names – Curry Up! The tacos we chose after a careful and difficult deliberation looked like this:

We had an hour before the train would leave, we took a quick coffee and very slowly headed to the train station. Slowly enough to notice a circle of people standing around a group of street performers next to the cathedral. The street performers looked like this:

We stopped for a song. It was La vie en rose by Édith Piaf and I stood speechless. I thought, wow, we’re really lucky because we only have time for one song. But then came Les Champs Élysées and we somehow forgot about the train. The energy of these guys woke up the butterflies in me and made me positively happy. Then came an a capella rendering of Mr Sandman, and words cannot do justice to what we have heard and felt and still feel.

The day could not have ended any better and when I think about Antwerp now, I don’t remember buildings or museums but how I felt in this magnificent city thanks to the singers and some very good company.

And I might browse through my old school books, to see if there are some more surprises to be found.