Having covered Metz and Nancy, it was now time to head further and discover Strasbourg, capital of the Alsace region. After a few false starts due to the bus driver needing a break before the journey began and the subsequent confusion over timings, we were on our way. We kicked off our visit with that well known French speciality, kebab, before deciding to become acquainted with the city from the comfort (or not, due to the child-sized seats) of a boat. Before reaching the river Ill, we strolled through the city, where the magnificent Notre-Dame cathedral seemed to emerge majestically out of nowhere. Being the sixth-tallest church in the world, it was certainly a challenge to photograph.

The boat tour itself, with its air-conditioning, proved a welcome respite from the 30-degree heat outside. It turned out to be an excellent way to view the city as we slowly glided past the old mismatched tanner houses, the futuristic European Parliament building and were raised and lowered through the locks (though by this point the gentle swaying of the boat combined with the classical music interlude meant that some trainees were too busy snoozing to notice).

The running commentary provided some interesting stories relating to Strasbourg’s fascinating history, some of it rather gruesome, and was interspersed with comical asides and random observations. The bizarre vocabulary left us all scratching our heads at times – a translation trainee would have done a much better job, of course. Having worked up an appetite, we decided to try out the tarte flambée/flammekueche, (or 5, for the more ravenous among us!), before heading to a park for some music and merriment, making friends with the local “policeman” and dancing the night away. 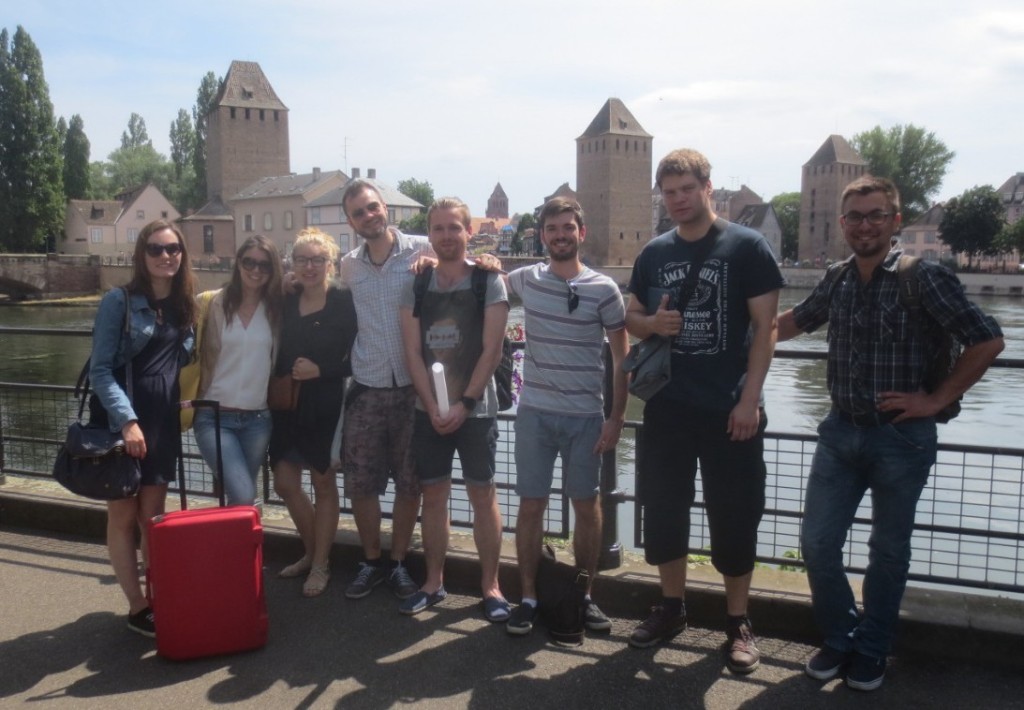 The following morning, bright-eyed and bushy-tailed, we grabbed a croissant and coffee with the locals, then wandered through the picturesque ‘Petite France’ area, which, with its Hansel and Gretel-style half-timbered houses and cobbled streets, gave us a wealth of photo opportunities.

We walked around the cathedral in awe and joined the crowd excitedly gathered around the astronomical clock, waiting for it to spring to life. Little did we realise we’d come too late for the main show and were instead presented with a solitary figure slowly shifting to the left. That’s 10 minutes of our lives we’ll never get back.

To round off the trip we had to fit in some more local cuisine and, undeterred by the dated décor and the mosquito theme, we opted for ‘Au Schnokeloch’ restaurant. The traditional Alsatian fare was enjoyed by all, however, and we just had enough time to take a few hundred more photos before leaving this fairy-tale city.

One thought on “A bite of Alsace”